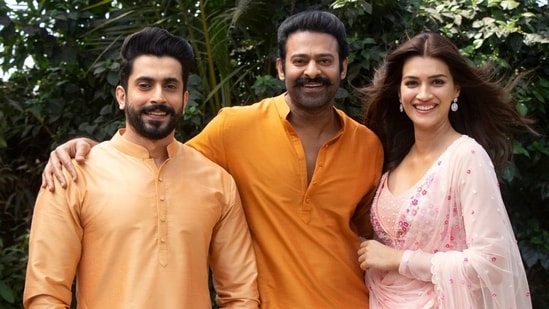 Kriti Sanon has shared her first pictures from Adipurush as she joined the Prabhas and Saif Ali Khan movie. Kriti reportedly plays Sita in the film.

Kriti Sanon took to social media on Friday morning to share pictures from her upcoming film, Adipurush. Starring Prabhas in the lead and Saif Ali Khan as the antagonist, Adipurush is a retelling of the Ramayana epic.

It appears that while Prabhas plays Lord Ram in the movie, Kriti plays Sita and Sunny might play Lakshman. The team was showered with good wishes on social media. “Congratulations and All the best darling,” wrote one. “Wow…. excited,” wrote another. Saif plays Lankesh, another name for Ravana, in the movie.

T-Series head Bhushan Kumar said, “When Kriti heard the script she instantly agreed for the part. On the other hand, Sunny fits the character perfectly. I am happy to have them on board.”

Om Raut adds, “When I was casting for the female lead, I needed an actress who not only has an amazing screen presence but more importantly, is also a great performer. Kriti was our obvious choice for the film. Sunny is a great actor and we’re sure he will impress viewers with his performance.”

Talking about the film, Prabhas had earlier said in a statement: “Every role and every character comes with its own challenges, but portraying a character like this comes with tremendous responsibility and pride. I am very excited to portray this character from our epic specially the way Om has designed it. I am sure the youth of our country will shower all their love on our film.”