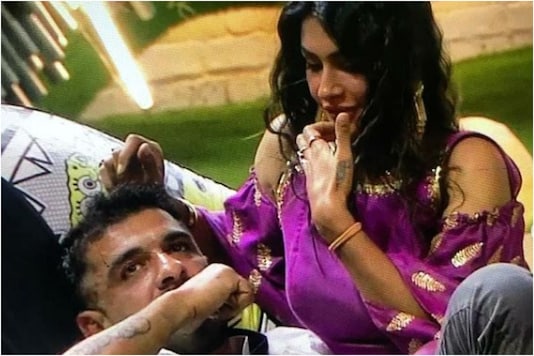 The chemistry between Pavitra Punia and Eijaz Khan is adored by the viewers of Bigg Boss 14.

The couple became the love-birds of this season with their affection for each other.

Even after her eviction, Pavitra has been showing her support for Eijaz.

In the upcoming Weekend Ka Vaar episode, all the contestants are going to meet their family members or loved ones. For Eijaz, Bigg Boss has invited Pavitra to meet him in the house of the reality show.

Recently, Eijaz has confessed his love for Pavitra on the show when Sunny Leone had come to meet the contestants of the show.

A glimpse from the upcoming episode shows Pavitra entering the Bigg Boss house and calling Eijaz.

She entered the house and was in the glass compartment when Bigg Boss allowed Eijaz to move. The two were delighted to see each other.

Speaking to Pavitra, Eijaz said that she is dying to speak about Pavitra to the people around him. Eijaz confessed that he is willing to share his life with Pavitra.

The actor said, “Tu jaisi hai, zindagi main jahan bhi hain, mujhe qubool hai [I accept you the way you are and wherever you stand in life].

Pavitra kissed Eijaz through the glass and confessed her love for him in this mushy clip shared by the official handle of Colors TV on Instagram.

The clip was shared by Pavitra as well. The two are receiving many positive comments from their fans.

One fan said that Pavitra gave Eijaz a beautiful surprise while another said, “You two make a perfect couple stay blessed guys.”

Another excited fan said that the fans are happy to watch the reunion of the couple. A fan said, “You both look outstanding together.”

A Pavijaz fan said that they are glad that Pavitra and Eijaz met.

The final of Bigg Boss 14 is going to happen on February 21. Eijaz is one of the finalists of this season.