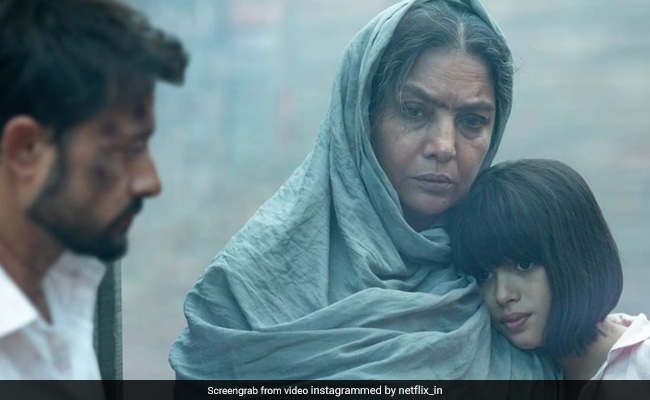 Kaali Khuhi Review: On The Watchability Meter, It Just About Passes Muster. The support she receives from Leela Samson, Sanjeeda Sheikh, and Riva Arorais laudably steady.

In first-time director Terrie Samundra’s Kaali Khuhi (The Black Well), the horrors of female infanticide committed in a fictional Punjab village – this neck of the woods remains nameless, suggesting that the terrible and widespread practice of eliminating girls at birth isn’t a geographically confined phenomenon in this country – cling to a home that has seen the worst of it. The film’s significant social signals are loud and clear. The methods it employs to deliver the message, however, do not hold up quite that well.

The Netflix India original film gives the solemn, urgent theme largely generic and literal treatment, which markedly turns the well-intentioned exercise into rather bland fare. As a preternatural thriller, Kaali Khuhi is akin to a well that runs dry all too quickly because it lacks depth and does not hold enough water.

Kaali Khuhi is undeniably strong on atmospherics. It is clear that the director has a keen sense of visual composition and sound design, two strong points of the film. Such is the film’s setting that the pitter-patter of rain, the croaking of frogs, the chirping of crickets and even the chiming of temple bells aren’t the benign sounds that they can usually be. Cinematographer Sejal Shah mines the milieu for its darkness interrupted by shafts of light from carefully placed sources. These yield shadows and suppressed haloes around objects and props that accentuate a sense of unease.

Unfortunately, Kaali Khuhi, from the point of the view of the narrative and its structure, isn’t as consistent as the evenness of the film’s images and soundscape. It swings from pure horror to outright mumbo-jumbo, from diligently composed frames that transport the viewer to a dark world in a bucolic setting to frequently shallow detailing (story and screenplay: Samundra and David Walter Lech) that lets the safety of uncomplicated exposition of ideas take precedence over the power of things left unsaid or merely suggested. There is very little of the latter in Kaali Khuhi.

Late in the film, when a certain degree of clarity has descended and the audience is beginning to figure out what precisely is going on, a character intones that the tradition is old and it is “evil”, as if we aren’t aware already. It is not too different when the same woman tells the protagonist, a ten-year-old city girl flummoxed no end by what she sees and hears in the village and in her daadi’s house, that she represents a “new generation” and “new thinking”. Kaali Khuhi does not leave much to the imagination.

The early moments of the film do spring a shudder or two and create an ambience of dread and foreboding. The story that Kaali Khuhi narrates is creepy all right, but it isn’t the kind of horror film that will give you a chill to the bone or play with your mind once it settles into the business of laying before us the details of the hamlet’s frightful past.

Needless to say, the story revolves around a dormant well and a gruesome secret hidden in its depths. In the opening sequence, a villager, armed with a pickaxe, unintentionally unseals the well. In the next scene: a girl even hitches a ride on another villager’s bicycle and reaches the metal gate of a house. That is where the prelude ends, paving the way for the introduction of the key characters.

A schoolgirl Shivangi (Riva Arora) accompanies her bickering parents, Priya (Sanjeeda Sheikh) and Darshan (Satyadeep Misra), on a trip to the village to check on her ailing paternal grandmother (Leela Samson). Once they are there, inexplicable events begin to unfold. Shivangi feels the presence of a spirit that is, to begin with, visible only as a reflection in a mirror or as a fleeting shadow. A mix of fear and curiosity overcomes the girl. In all her innocence, she sets out to dig deeper.

The kaali khuhi and the wandering spirit conceal secrets that neither Shivangi nor her mother has any way of unravelling. But Darshan, his mother and Satya maasi (Shabana Azmi), who lives in the adjoining house, are in the know of things.

The village, enveloped in mist and mystery, is obviously a crucial presence in the story. The action takes place principally in and around the well in the middle of a farm, the grandmother’s home, a cupboard in the bedroom, and a room on the terrace. Tucked away into these spaces are stories of a despicable custom steeped in blood and brutality. When the film blows the lid off these tales, the revelation does not exactly send you reeling in shock and disgust because you can see them coming from a mile away.

Kaali Khuhi suggests that women are as much to blame as men for the perpetuation of female infanticide. The film has only one major male character, Darshan, and he seems to possess no power at all over his life. All that he can do is insist that he will never again leave his mother’s home even as his wife and daughter are dead against the idea of staying on in the cursed village.

Also read  Happy birthday Shabana Azmi: This is the life lesson Kaifi Azmi gave his talented daughter when she wanted to join films

The focus of the film is instead on three generations of women and other female elders, one of whom appears in the film’s most ominous scenes doing what she wills. Shivangi’s daadi and Satya maasi represent the past, Priya the present and the pre-teen girl the future. The question is, can Shivangi, the girl who got away, gather the courage to reverse the malefic repercussions of events of the past and usher in calmer days for the benighted village?

Shabana Azmi as the woman who knows too much and has chronicled the fate of the village’s disappearing daughters in a carefully preserved scrapbook leads the cast with a customary air of authority. The support she receives from Leela Samson, Sanjeeda Sheikh and Riva Arora, on whose slender shoulders Kaali Khushi rests, is laudably steady.

Kaali Khuhi has two other child actors, Hetvi Bhanushali (as the spirit) and Rose Rathod (as Chandni, the girl who lives with Satya Maasi and is wary of what is going on next door). Both of them do their bit. Satyadeep Misra is the odd one out in the cast. Playing a feckless man paying for the sins of his family and his village, he projects just the right degree of self-effacement.

Watch the Trailer of Kaali Khuhi