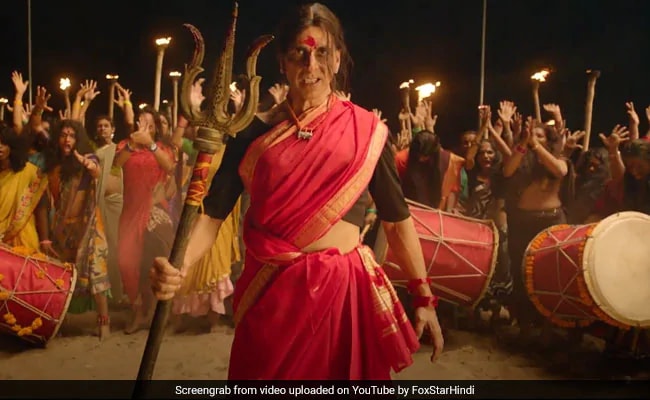 Laxmii Movie Review: A Dreadful Dud, Starring A Hammy Akshay Kumar. The acting is pedestrian but why fault the actors? They are as helpless as the audience, trapped in a bizarre storyline overrun by excess.

It is just as well that this film was forced by controversies to drop ‘Bomb’ from its title. Laxmii, streaming on Hotstar, never gets anywhere near delivering entertainment that could be deemed explosive. If anything, it is enervating. Starring an ill-advisedly hammy Akshay Kumar as a man possessed by a transgender revenge-seeker who returns from the dead to attend to unfinished business, is a dreadful dud.

A spectre of insufferable idiocy looms over Laxmii.That is a barrier too steep for the film to surmount no matter how hard the actors try to inject life into a nonsensical screenplay. They are called upon to carry the burden of lame gags on their shoulders and flail about desperately to hide the film’s regressive core. A tall order that.

The male protagonist of Laxmii, Asif (Akshay Kumar), does not believe in the existence of ghosts. If I do chance upon a ghost, he declares more than once, main chudiya pehen loonga (I will start wearing bangles). Apart from being unconscionably offensive from the perspective of gender sensitivity, his weird statement of intent makes as little sense as anything that the rest of the film has to offer.

When the vengeful spirit takes hold of Asif, one of the first things the latter does is sport bright red bangles. He gnashes his teeth, ululates threateningly and adopts a swaying gait to indicate that he is no longer the Asif that his wife Rashmi (Kiara Advani) knows. The lady and her parents (Rajesh Sharma and Ayesha Raza) and brother (Manu Rishi) and sis-in-law (Ashwini Kalsekar) are alarmed by Asif’s “auraton waali harkatein” (feminine mannerisms). If you are a woman in the Laxmii universe, you can only be a butt of ridicule.

Amid it all, the colour of blood dominates – besides the red bangles, there are red dupattas, red sarees and red bindis strewn all across Laxmii. But the film, on its part, is never on a red-hot streak. All its sound and fury come to naught because they are expended on a yucky yarn that spins an appallingly mindless web.

Laxmii, a remake by writer-director Raghava Lawrence of his own 2011 Tamil hit Muni 2: Kanchana, is a horror-comedy that is more laughable than funny, more horrid than horrific. It is less a movie than an excruciating ordeal devoid of any semblance of a bright spot.

The acting is pedestrian despite the presence in the cast of the likes of the usually dependable Ayesha Raza, Rajesh Sharma, Manu Rishi and Sharad Kelkar (who appears late in the film and, in the handful of scenes that he has, makes a far stronger impression than everyone else put together). But why fault the actors? They are as helpless as the audience, trapped in a bizarre storyline overrun by excess.

With Akshay Kumar stepping into the shoes of the ‘male’ protagonist, the character undergoes a transformation. He is no longer a man so mortified by ghosts that he retreats into his home before sunset. In Laxmii, he is an intrepid hero, a rationalist out to expose religious charlatans and put an end to stories of ghosts and ghouls. It is of course another matter that he is eventually happy to be pulled into a vortex of absolute drivel revolving around an evil spirit determined to dish out bloody retribution to a vicious villain (Tarun Arora) and his henchmen.

Laxmii, in a strictly superficial sense and manner, flirts with subversion. The hero and his wife represent a Hindu-Muslim marital union that is opposed tooth and nail by a conservative patriarch whose infinitely more accommodating wife swigs alcohol straight from a pint-sized bottle and stands up to him when she is high enough to throw caution to the wind.

That apart, the plot of the film hinges primarily on an accidental alliance that is forged between an Asif who does not wear his religious identity on his sleeves and a Laxmii whose beliefs and practices are firmly Hindu. The film breaches religious divides in significant ways but prefers not to go the whole hog with that act of courage.

Early in the film, one of the characters, the hero’s chirpy nephew, expresses surprise that people are still unable to break away from the Hindu-Muslim binary. The film moves on from there without offering any further expository comment as if it is fearful of expanding on the idea and integrating it fully into the plot. Kuch toh gadbad hai, another character says when matters begin to spiral out of control. We agree!

Laxmii is infinitely worse when it seeks to hold forth on the question of gender identity and the importance of embracing those that are different. With Akshay Kumar unabashedly caricaturing his transgender avatar that is so crucial to the film, it becomes impossible to digest anything that Laxmii tries to articulate about society’s insensitivity towards the third gender. Neither the substance of its plea nor the shrillness with which it is sought to be transmitted sounds authentic.

By presenting victimhood as the main point around which the vengeance tale pivots, the film robs the titular character of the dignity she deserves. Worse, in the run-up to the climax, it turns grotesquely preachy. When you think it can’t go any lower, it does. It charts a steady, uninterrupted decline into unbridled lunacy and certainly not of the inspired variety.

The first hour of the 140-minute film is devoted to extracting mirth from the encounters between the family of Asif’s wife and the apparition that lurks in the shadows and haunts their house. The effort yields nothing except utter bilge.

So, do not expect either jump scares or chills down your spine. There aren’t any unless you find sounds of wailing and laughter from undisclosed sources scary or shadows on the wall, reflections in the mirror, flickering lights, a wooden horse rocking of its own volition, or blood-smeared cricket stumps petrifying.

The last hour of Laxmii enunciates why the ‘evil’ spirit has been hovering over an abandoned, fenced plot of land and its environs. The remainder of the film rests on the dark secrets that are buried there. By the time they are dug up from the bowels of the earth, they are shorn of the power to spring any real surprises.

Laxmii, unalloyed gobbledygook even by ghost story standards, is a film best left alone. Even if you are an Akshay Kumar fan, look before you leap.