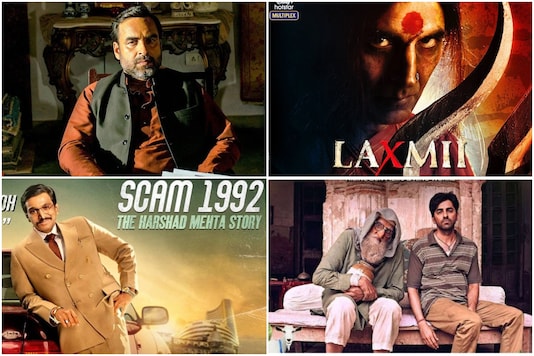 2020 proved that content is not only king, but kingmaker as well. OTT platforms not only leveled the playing field between stars and actors, but also tilted the scales in favour of those who delivered praiseworthy performances in critically acclaimed shows.

The battle between cinema and OTT has been a major topic of discussion ever since the digital boom became too big to be ignored. Many experts predicted that the end of movie-going as we know it is near, while others continued to bet on the big screen appeal.

While the debate was still on, the coronavirus pandemic in 2020 eliminated movie theatres as a means of entertainment for a major part of the year. It was as if the battle was already won by streaming platforms, thanks to theatres remaining shut all over the world.

2020 proved that content is not only king, but kingmaker as well. OTT platforms not only leveled the playing field between stars and actors, but also tilted the scales in favour of those who delivered praiseworthy performances in critically acclaimed shows.

Several Bollywood actors entered the web space this year. Abhishek Bachchan starred in season 2 of the suspense thriller series Breathe. Bobby Deol made his OTT debut with crime drama series Aashram. Sushmita Sen made her acting comeback with the crime drama series Aarya. These titles were heavily publicised in the name of the lead stars, but met with moderate success once they premiered. Some of the most popular shows of the year, like Asur, Panchayat, Special Ops, Paatal Lok, Mirzapur 2 and Scam 1992, did not bank on star power.

The Amazon Original Series Panchayat released a few weeks after the lockdown began. Starring Jitendra Kumar, Neena Gupta and Raghubir Yadav, the series won hearts for its simple story presented with a touch of humour. No wonder It has an 8.7 rating on IMDb.

It was followed by the much-hyped Pataal Lok with its ensemble cast and large-scale production. The crime thriller is considered one of the best web series to have released in 2020. Actors like Jaideep Ahlawat, Neeraj Kabi and Abhishek Banerjee once again proved that right casting can work wonders for a series. Paatal Lok has a 7.8 IMDb rating.

Mirzapur Season 1 has a 8.4 rating on IMDb, while its second season is at 5 stars currently. The script of S2 might not have impressed many, but the show has sealed its spot as one of the most anticipated Indian web series. Pankaj Tripathi, Divyenndu and Ali Fazal continue to be among the reigning stars of OTT space, and Bollywood names like Abhishek Bachchan and Bobby Deol cannot rival their popularity.

Since there are no box office numbers to measure the popularity of content on OTT, social media trends provide a good idea about the shows that become a part of popular discourse. If your show and its dialogues generate memes, kick off Twitter wars and trending hashtags, it means you have hit the right spot. Pankaj Tripathi as Kaleen Bhaiya, Divyenndu as Munna Tripathi, Abhishek Banerjee as Hathoda Tyagi, Swastika Mukherjee as the dog-loving Dolly have all been part of most circulated memes. “Memes being made on me means people love my acting and are accepting me — that I am able to entertain them,” Tripathi said in a recent interview.

Mirzapur actresses Harshita Gaur and Isha Talwar became ‘national crushes’ thanks to the popularity of season 2. The two of them also feature on IMDb’s Year-End List of Stars Who Had Breakout Career Moments on OTT, alongwith Swastika Mukherjee (Paatal Lok) and Shreya Dhanwanthary (Scam 1992). The web series format also proves that every character gets its due, as opposed to focusing on the protagonist only.

Scam 1992, directed by Hansal Mehta, is another show that has received massive appreciation this year. With a 9.5 rating on IMDb, it has made stars out of Pratik Gandhi and Shreya Dhanwanthary, proving once again that the power of good storytelling can lead to unprecedented success. It has trended on social media for days, provided fodder for umpteen memes and proved that you don’t need popular faces or glitzy sets to attract audiences.

The films that were forced to take the digital route due to theatres being shut weren’t that lucky. Amitabh Bachchan-Ayushmann Khurrana starrer Gulabo Sitabo earned decent reviews. Vidya Balan starrer Shakuntala Devi generated moderate hype. But none of them could match the popularity of the top web series this year, proving that the streaming space is a different ballgame altogether.

While the power of social media drove viewers by the hordes to Sushant Singh Rajput’s last film Dil Bechara, the flip side was suffered by films like Janhvi Kapoor starrer Gunjan Saxena and Sadak 2 featuring Sanjay Dutt and Alia Bhatt. As the nepotism debate continued to rage, these stars became victims of the ‘boycott’ hashtags on Twitter every day. Their films released amid an environment of negativity, and weak scripts couldn’t salvage the situation either.

Stars like Salman Khan and Ranveer Singh stayed out of the race this year. Akshay Kumar, who usually has 3-4 releases in a year, decided to test waters by premiering Laxmii digitally. The horror comedy, a south remake, had all the makings of a masala entertainer but failed to impress the OTT audience. Despite being one of the biggest releases of the year, Laxmii failed to sustain the hype for more than a few days post release. The film currently has a 2.3 rating on IMDb.

By eliminating the box office race altogether, 2020 brought Bollywood stars and digital content creators onto the same race track. The viewer here is smart and not easily fooled by glamour and promotional gimmicks. Social media trends, audience reviews and IMDb ratings proved that it doesn’t matter whether you serve an Amitabh Bachchan or his son on a platter – if the story isn’t compelling, you’ll be removed from the watchlist.